OUR PHONE SCREENING PROTOCOL FOR YOUR PROTECTION

When patients call for an appointment they are always asked the reason for their visit.
If they complain of fever, headache, vomiting or diarrhea they should always be asked whether they or any family member have any travel history outside of the country within the past 21 days.
If they answer yes, then they should be asked whether the travel included any travel from Africa.
If they answer yes, then before they are given an appointment they need to speak with the the physician that the appointment is being made with.
The physician WILL take the call AT THE TIME to make a decision regarding the management/disposition.
Patients who have a suspicious history are NOT and should NOT be told to come in or be sent to a walk-in or ER.

If they answer that there is no personal risk of exposure, then they should be given an appointment.


NOTE TO PATIENTS:
If you suspect or are concerned that you have Ebola or have been exposed to Ebola, it is irresponsible to just arrive at a doctor's office, walk in clinic or ER without calling ahead and asking about what you should do so as not to expose others (strangers, doctors, nurses etc)

Symptoms of Ebola include:Symptoms may appear anywhere from 2 to 21 days after exposure to Ebola, but the average is 8 to 10 days.
Ebola experts say the disease cannot be transmitted before the appearance of symptoms.


Patients with EVD generally have abrupt onset of fever and symptoms typically 8 to12 days after exposure (incubation period for current outbreak has a mean of approximately 9 to 11 days). Initial signs and symptoms are nonspecific and may include fever, chills, myalgias, and malaise. Due to these nonspecific symptoms, particularly early in the course, EVD can often be confused with other more common infectious diseases such as malaria, typhoid fever, meningococcemia, and other bacterial infections (e.g., pneumonia).

Patients can progress from the initial non-specific symptoms after about 5 days to develop gastrointestinal symptoms such as severe watery diarrhea, nausea, vomiting and abdominal pain. Other symptoms such as chest pain, shortness of breath, headache or confusion, may also develop. Patients often have conjunctival injection. Hiccups have been reported. Seizures may occur, and cerebral edema has been reported. Bleeding is not universally present but can manifest later in the course as petechiae, ecchymosis/bruising, or oozing from venipuncture sites and mucosal hemorrhage. Frank hemorrhage is less common; in the current outbreak unexplained bleeding has been reported from only 18% of patients, most often blood in the stool (about 6%). Patients may develop a diffuse erythematous maculopapular rash by day 5 to 7 (usually involving the neck, trunk, and arms) that can desquamate. Pregnant women may experience spontaneous miscarriages. The most common signs and symptoms reported from West Africa during the current outbreak from symptom-onset to the time the case was detected include: fever (87%), fatigue (76%), vomiting (68%), diarrhea (66%), and loss of appetite (65%).

Patients with fatal disease usually develop more severe clinical signs early during infection and die typically between days 6 and 16 of complications including multi-organ failure and septic shock (mean of 7.5 days from symptom-onset to death during the current outbreak in West Africa). In non-fatal cases, patients may have fever for several days and improve, typically around day 6. Patients that survive can have a prolonged convalescence. The case fatality proportion among patients in West Africa with a known outcome is about 71% (ranges from 46% in Nigeria to 69-72% in Guinea, Sierra Leone and Liberia). Risk factors significantly associated with a fatal outcome in the affected countries in West Africa include, age >45 years old, unexplained bleeding, and a number of other signs and symptoms (diarrhea, chest pain, cough, difficulty breathing, difficulty swallowing, conjunctivitis, sore throat, confusion, hiccups, and coma or unconsciousness).


Ebola virus enters the patient through mucous membranes, breaks in the skin, or parenterally and infects many cell types, including monocytes, macrophages, dendritic cells, endothelial cells, fibroblasts, hepatocytes, adrenal cortical cells and epithelial cells. The incubation period may be related to the infection route (e.g., 6 days for injection versus 10 days for contact). Ebola virus migrates from the initial infection site to regional lymph nodes and subsequently to the liver, spleen and adrenal gland. Although not infected by Ebola virus, lymphocytes undergo apoptosis resulting in decreased lymphocyte counts. Hepatocellular necrosis occurs and is associated with dysregulation of clotting factors and subsequent coagulopathy. Adrenocortical necrosis also can be found and is associated with hypotension and impaired steroid synthesis. Ebola virus appears to trigger a release of pro-inflammatory cytokines with subsequent vascular leak and impairment of clotting ultimately resulting in multi-organ failure and shock.


Laboratory findings at admission may include leukopenia frequently with lymphopenia followed later by elevated neutrophils and a left shift. Platelet counts are often decreased in the 50,000 to 100,000 range. Amylase may be elevated, reflecting pancreatic involvement (inflammation/infection). Hepatic transaminases are elevated with aspartate aminotransferase (AST) exceeding alanine aminotransferase (ALT); these values may peak at more than 1,000 IU/L. Proteinuria may be present. Prothrombin (PT) and partial thromboplastin times (PTT) are prolonged and fibrin degradation products are elevated, consistent with disseminated intravascular coagulation (DIC).


The Ebola virus is fragile and susceptible to drying out. It does not normally survive for more than a few hours on a hard, dry surface.
There is no evidence that it has been passed, as colds or flu sometimes are, by touching surfaces that someone else touched after sneezing into their hand. Ebola is normally passed through contact with blood, vomit or diarrhea. 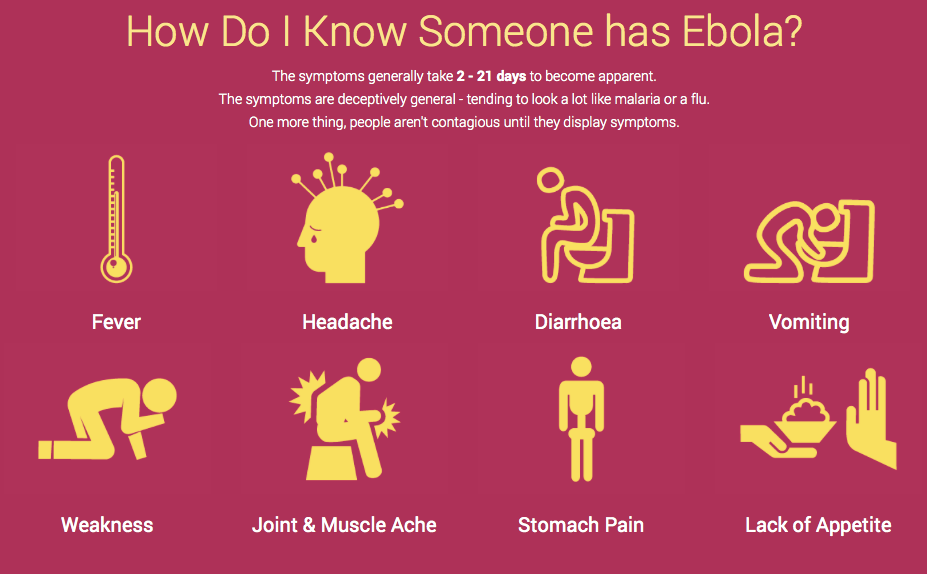 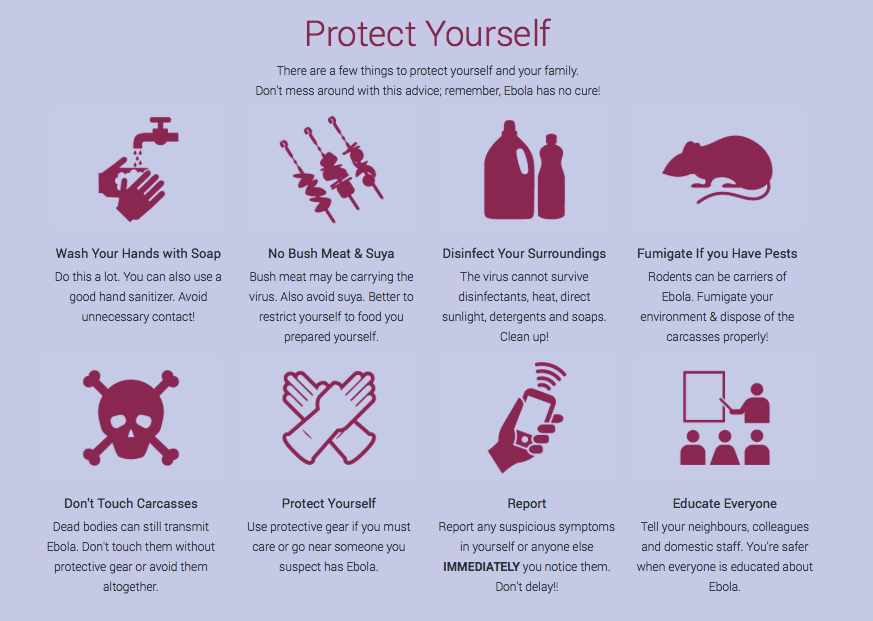 And just because someone is from Africa.......
Put it in perspective. It is a massive continent! 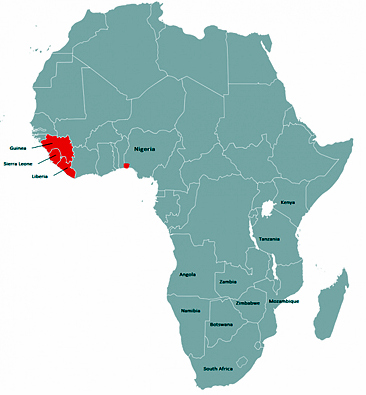