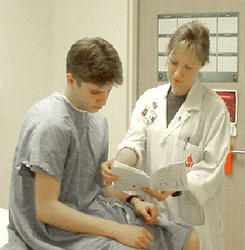 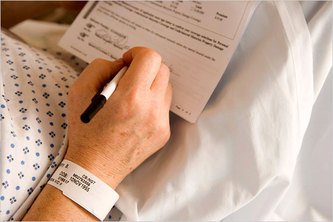 Informed consent is more than simply getting a patient to sign a written consent form. It is a process of communication between a patient and physician that results in the patient's authorization or agreement to undergo a specific medical intervention.

In the communications process, you, as the physician providing or performing the treatment and/or procedure (not a delegated representative), should disclose and discuss with your patient:

In turn, your patient should have an opportunity to ask questions to elicit a better understanding of the treatment or procedure, so that he or she can make an informed decision to proceed or to refuse a particular course of medical intervention.

This communications process, or a variation thereof, is both an ethical obligation and a legal requirement spelled out in statutes and case law in all 50 states

Consent Forms That Patients Can Understand

Informed consent may be the biggest misnomer in medicine: Studies show that most patients don't read the forms they sign before undergoing surgery or medical treatment. More than half of those who do read the forms don't understand them, and only a quarter of forms include all of the data patients need to make an informed decision.

Now, with mounting concern about patient safety and lawsuits arising from botched communications, doctors and hospitals are redesigning their informed-consent procedures to make sure patients better understand the care they are about to receive. Hospitals are offering explanatory videos and diagrams with legal-consent forms, translating medical lingo into simple English and offering materials in other languages to explain procedures and describe alternative therapies. They are also turning to high-tech solutions, such as Web-based databases to help calculate risks and benefits for patients before consents are signed, and electronic forms to reduce the problem of lost paper forms that delay procedures, adding to hospital costs.

The Centers for Medicare and Medicaid Services recently issued new guidelines calling on hospitals to design patient-friendly informed-consent processes that include describing treatment alternatives and the consequences of declining recommended therapies; hospitals that don't comply could lose their eligibility to bill Medicare for treatments. The Joint Commission, which accredits hospitals, is advocating the use of easy-to-read forms and the use of methods such as "teach back," which involve asking patients to repeat back what they've been told about risks and benefits.

"We cannot just walk into patients' rooms and tell them they need surgery and give them an unintelligible form to sign," says Harlan Krumholz, a cardiologist and professor of medicine at Yale University who is working with several groups to improve the informed-consent process. "This shouldn't be a three-minute discussion, but a process by which doctor and patient come together to make shared decisions."

The Department of Veteran's Affairs, with 153 hospitals, has over the past several years adopted a new electronic informed-consent software program that allows patients to use a digital pad to sign the consent forms, which can then be stored in their medical record. The program, known as iMedConsent, includes a library of anatomical diagrams and explanations written at a sixth-grade reading level for more than 2,000 procedures in more than 30 medical specialties.

It initially took more time to complete the process, and some doctors were resistant. But after about two weeks of use, the new system was just as quick as the old paper ones. Also, patients with elective procedures can now be given the materials before the scheduled procedure, according to Ellen Fox, director of the VA's National Center for Ethics. "Informed consent is an essential yet all too often neglected part of quality in health care," Dr. Fox says. "A surgical procedure could be perfectly executed from a technical standpoint, but if the patient had never been informed about the procedure or had been misinformed, that would not be a quality health-care experience."

The VA says reports of misplaced or lost forms are much less common under the electronic system; 3.06 million informed-consent forms have been signed using the system, and patients are generally very comfortable using the signature-pad technology.

Fay Rozovsky, a leading health-care-risk-management consultant and author of "Consent to Treatment," a manual for health lawyers, says that for years, hospitals have treated informed consent as an "administrative nuisance" instead of an important opportunity to "establish a meaningful rapport with the patient and family." Failure to obtain informed consent is one of the most common allegations in medical-malpractice suits, she notes. And though tort reform has reduced the frequency of such suits, state laws have allowed patients to sue hospitals for civil battery, fraud, deceit and breach of contract if they can prove informed consent was lacking in their care. Patients may also turn to professional disciplinary boards and charge physicians with unprofessional conduct or attempt to have their license revoked.

A number of companies now help hospitals document the steps they have taken to provide informed consent. Chicago-based Emmi Solutions, for example, is helping hospitals design new informed-consent forms with interactive programs that patients can view on a home computer prior to signing. Atlanta, Ga.-based Dialog Medical, which created the iMedConsent program used by the VA and other hospitals, charges the average 250-bed hospital about $200,000 to $300,000 for the initial license for the program, and annual fees of $50,000 to $100,000 for information updates and maintenance.

The VA is now conducting a study in seven hospitals to determine whether using the iMedConsent software along with a "teach back" process asking patients to explain what they've been told in their own words, will improve surgical patients' comprehension of the proposed surgery in comparison with the standard consent process.

Dean Schillinger, a professor of clinical medicine at the University of California at San Francisco, says the "teach back" method is especially beneficial for older patients and those with limited English proficiency, who are at the highest risk of signing informed-consent documents they don't understand. One study at UCSF found that by writing consent forms at a sixth-grade reading level, testing patients' comprehension and explaining things until they understood, the number of patients who could answer comprehension questions correctly rose to 98% from between 15% and 28%.

"First-grade teachers know how to make sure kids understand what they've been taught and can repeat it back to you, but we don't learn how to do this in medical school," says Dr. Schillinger.

At the Mid America Heart Institute, part of the St. Luke's Health System in Kansas City, Mo., John Spertus, director of outcomes research, says risk managers were concerned that the informed-consent process wasn't adequate to help coronary patients make complex decisions about care -- such as whether to go with one of the new drug-eluding stents or a metal stent for an artery blockage. Using a Web-based database of outcomes, the hospital now provides guidance to help predict each patient's benefits and risks using different treatment scenarios. New four-page consent forms written at an eighth-grade reading level replaced two-page forms at a college level. They include pictures of the procedure and explanations of all medical terms, such as coronary angiography ("heart-dye study") and show a patient's individual risk for complications such as the risk of a blood vessel closing again within a year.

"Patients read the consent forms more closely and feel less anxious and feel that the doctor involved them more in the decision," Dr. Spertus says. The data and the new consent process also help doctors make better decisions, such as in cases where a patient appears healthy but is in a high-risk category, he adds.  George Butler, a 78-year-old retired engineer with a stent in one artery, was at the hospital last week for an angiography, used to perform diagnostic tests and treatments on the heart. He read and signed the consent form, which said he understood that doctors would likely be able to decide on a treatment plan only after they saw the nature of the blockage. The form authorized any procedure "needed to best take care of me." While Mr. Butler had another blocked artery, surgeons opted not to implant another stent and instead treat him with medications.

"The forms were much easier to understand and I spent more time reading them than I ever have before," says Mr. Butler. "The others I've seen seemed to be written by lawyers and these were more in consumer or layman terms."