Helicobacter pylori is a spiral shaped bacterium that lives in the stomach and duodenum (section of intestine just below stomach). It has a unique way of adapting in the harsh environment of the stomach.

The inside of the stomach is bathed in about half a gallon of gastric juice every day. Gastric juice is composed of digestive enzymes and concentrated hydrochloric acid, which can readily tear apart the toughest food or microorganism. Bacteria, viruses, and yesterdays steak dinner are all consumed in this deadly bath of chemicals. It used to be thought that the stomach contained no bacteria and was actually sterile, but Helicobacter pylori changed that.

The stomach is protected from its own gastric juice by a thick layer of mucus that covers the stomach lining. Helicobacter pylori takes advantage of this protection by living in the mucus lining.

Urea hydrolysis:
Urea is broken down to ammonia and carbon dioxide Once H. pylori is safely ensconced in the mucus, it is able to fight the stomach acid that does reach it with an enzyme it possesses called urease. Urease converts urea, of which there is an abundant supply in the stomach (from saliva and gastric juices), into bicarbonate and ammonia, which are strong bases. This creates a cloud of acid neutralizing chemicals around the H. pylori, protecting it from the acid in the stomach. The reaction of urea hydrolysis is important for diagnosis of H.pylori by the breath test.

Gram stain of H. Pylori:
Another defense H. pylori has is that the body's natural defenses cannot reach the bacterium in the mucus lining of the stomach. The immune system will respond to an H. pylori infection by sending white cells, killer T cells, and other infection fighting agents. However, these potential H. pylori eradicators cannot reach the infection, because they cannot easily get through stomach lining. They do not go away either, though, and the immune response grows and grows. Polymorphs die, and spill their destructive compounds (superoxide radicals) on stomach lining cells. Extra nutrients are sent to reinforce the white cells, and the H. pylori can feed on this. within a few days, gastritis and perhaps eventually a peptic ulcer results. It may not be H. pylori itself which causes peptic ulcer, but the inflammation of the stomach lining, i.e. the response to H. pylori.

After treatment of H. pylori , it is necessary to repeat one of these tests to see if the germ has been killed or eradicated for good. Only breath tests or endoscopy with biopsy can be used to prove that the bacterium has been eradicated. The blood test (serology ) is not suitable to monitor H.pylori eradication because antibodies to H.pylori may remain positive for months or even years after successfully killing the H. pylori .

Risks of H. Pylori Therapy
There is a small risk associated with taking bismuth drugs (for example, Pepto-Bismol). They may temporarily cause grey staining of the teeth and mouth and can cause constipation, diarrhea, and blackening of the stools. All antibiotics have a small risk of an allergic reaction. The antibiotics we recommend are called amoxycillin, clarithromycin, tetracycline and metronidazole. If your H. pylori infection is difficult to cure, we may suggest that you take different antibiotics or higher doses in order to treat it. If you have ever had a reaction to antibiotics, you should tell your doctor (for example, penicillin allergy). The antibiotics are commonly used and are safe, but they may cause a bad taste in the mouth (clarithromycin, metronidazole, dizziness , tingling, stomach upset, diarrhea and very rarely, fatal reactions (as may occur with all antibiotics). If you are given metronidazole, you should not drink alcohol while taking the drug because an unpleasant reaction may occur (flushing, headaches, and nausea). Flagyl (metronidazole) should not be used in pregnancy.


Treatment Rules
Acid lowering drugs such as ranitidine, cimetidine, famotidine, omeprazole, pantoprazole and lansoprazole are generally safe, but discuss them with your doctor and read the package for more information. Only combinations of antibiotics with the above medications have been shown to eradicate H.pylori . Some patients have developed transient Candida (i.e.yeast) infection after antibiotic use. If you are concerned about this discuss it with your doctor and take an antifungal agent if appropriate.

If you are pregnant or likely to become so, you should tell your doctor and they may decide not to treat your H. Pylori infection or to use a special combination of antibiotic therapy.

Antibiotic therapy should not be given unless a diagnostic test for H.pylori has been performed and a positive result is obtained. The absence of H.pylori in peptic ulcer is a diagnostic pointer to an unusual and perhaps more serious etiology. There is no justification for treating patients longer than 14 days. Cure rates have been less with shorter therapies but longer therapies have not been shown to result in greater cure rates. If 14 day therapy fails, the bacterium is probably resistant to that antibiotic combination and future therapy may need to be guided by antimicrobial sensitivity testing of the cultured organism from that particular patient.

If therapy fails, your doctor should try not to use the same combination of antibiotics again. H.pylori easily becomes resistant to metronidazole and clarithromycin, so these agents should not be used twice unless antibiotic sensitivity data is available to support their continued use. After therapy, avoid antimicrobial agents for 4 weeks and omeprazole for one week before doing a diagnostic test (biopsy for histology and CLOtest , or a urea breath test either C14 or C13 ) to confirm eradication.


Resistant Infections
If two therapies fail (and H.pylori still persists as indicated by by breath test or endoscopy and biopsy analysis) then expert advice is required. You may have antibiotic resistant H.pylori. .

Homeopathic Remedies
There is no data available to support their use. It seems that if homeopathic remedies worked, the makers would perform clinical trials to prove it and then have them widely available under prescription. Since most if not all manufacturers of homeopathic and naturopathic remedies for H.pylori have not conducted requisite clinical trials (which are very expensive to conduct) then we can assume that the manufacturers don't really believe that their remedies work at all! So be wary of such remedies.

We recommend that you take the real medically proven therapies described above. Interestingly, some compounds used as natural therapies do suppress (but not cure) Helicobacter pylori . An example is lactobacilli found in yoghurt.

Basically, HP is tough to eradicate if you don't do it "by the book".

Vaccines
Vaccines are being tested in animals and humans. Despite many clinical trials, it is very early days yet. At the present point in time there are no vaccines for the prevention of H. pylori

We do not recommend routine antibiotic treatment of asymptomatic patients (i.e. those patients who do not have any symptoms) who are found to have H. pylori. The only exceptions are patients who are (1) relatives of persons with gastric cancer, (2) patients in whom intestinal metaplasia has been detected on gastric biopsy, or (3) infected spouses of patients who have been reinfected with H.pylori a second or third time after initial antibiotic treatment. 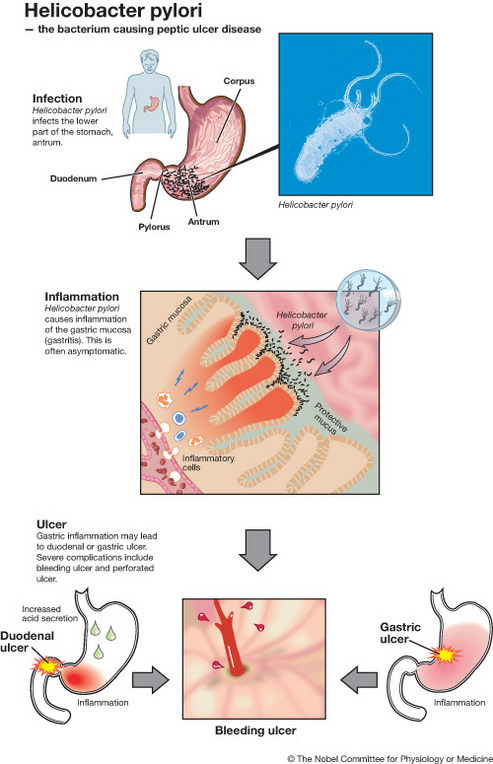